TORONTO–Scott Mitchell, Chair of Canadian Federation of Independent Grocers (CFIG), Thomas A. Barlow, President and CEO, and the CFIG Board of Directors are pleased to announce Steve R. Fox, senior vice-president, customer development at Nestlé Canada Inc.,as a 2014 recipient of CFIG’s prestigious Life Member Award in the Industry Builder category.

Steve Fox is a Past Chair of the CFIG Associate Members’ Council (AMC) and is currently the Senior Vice President, Customer Development, Nestlé Canada Inc.

Born and raised in Toronto, Steve is a graduate from the Marketing Management Program at Centennial College.  After graduating, Steve spent 12 years with Kraft where he held increasingly senior positions including Director of Sales for Ontario and Atlantic regions.

Steve is a strong supporter of Network of Executive Women and an active participant in Kids Help Phone initiatives. Thomas A. Barlow, president and CEO of CFIG said on Steve’s award: “Steve is recognized by his peers as a leader amongst leaders in the Canadian retail sector.   But what makes Steve unique is not that he is a great supporter of the grocery sector, but that he gives of his personal time to help make Canada a better place. His selfless commitment to causes like the Kids Help Phone is a testament to why Steve is this year’s Industry Builder Life Member.”

Steve and his wife, Yvonne, have been married for 31 years and have four children Laura, Brett, Kevin and Liam, and a son-in-law, Justin. 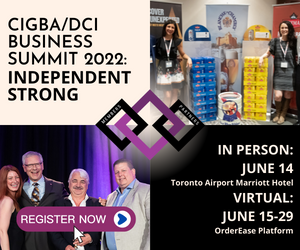