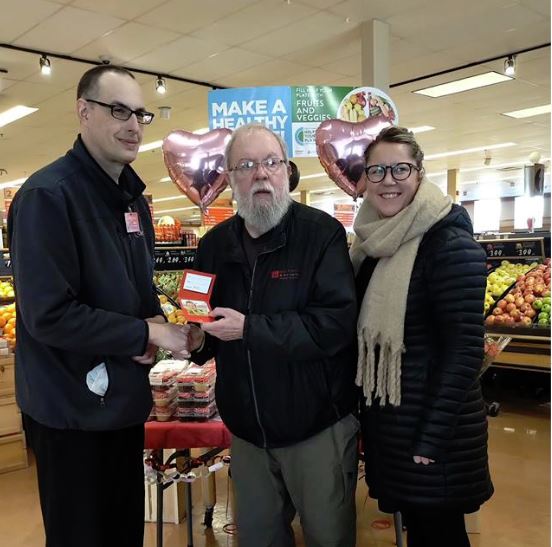 A secondary presentation was also made through the generosity of one of our vendors – Rod Legge of Advantage Solutions Inc. who purchased a $500 Colemans Gift Card for us to donate.

Colemans has been a proud supporter of the Community Food Sharing Association and the work of its General Manager Eg Walters for many years.  So when VOCM Cares reached out with an idea to launch a campaign to generate public awareness surrounding the recent fire that destroyed thousands of dollars’ worth of food destined for Food Banks across the province, Colemans didn’t hesitate to get involved.

On Saturday Feb 2 from 9 am – 1 pm two East Coast locations including Colemans Mt Pearl & Colemans Market NL Dr. hosted the VOCM Share to Care Food Drive.  Colemans kick started the event with a $10,000 donation. The public can help too by swiping the Colemans Foods For Friends Card at any of our 12 Colemans locations across the province which adds a $1.00 to their grocery bill. Colemans Gift Cards and Food donations will also be graciously accepted with every contribution whether it’s large or small going to the Food Sharing Network.